Two more people have died from the coronavirus as 219 new cases of Covid-19 were confirmed this evening.

The Department of Health confirmed the latest and fatalities at its daily briefing to media.

Meanwhile, preparations are under way in Waterford to establish a Covid-19 testing facility at the Institute of Technology’s sports arena.

WIT confirmed this evening that service is being established in partnership with UPMC under the direction of the Health Service Executive (HSE). 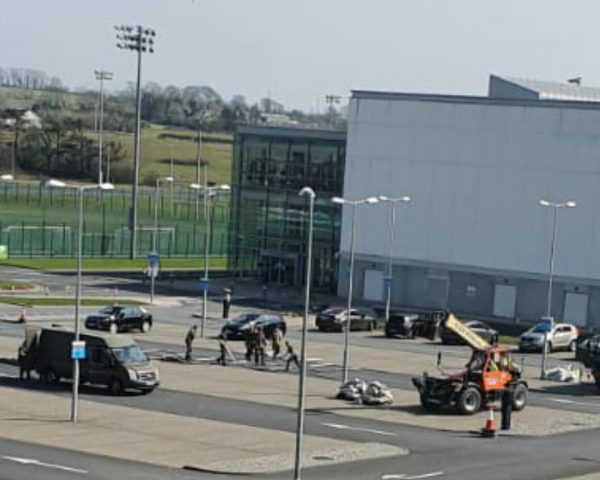 WaterfordNow.ie broke the story at lunchtime today after our exclusive picture (below) showed Defence Forces members erecting tents in the car park at the WIT Arena.

Health Minister Simon Harris earlier said priority testing, for example for healthcare workers, may be implemented as the number of confirmed cases rises.

Health officials have said that the waiting time for a test for the coronavirus is between four to five days and around 40,000 people are currently waiting for a test.

But it said that additional centres were being installed across the country to cope with the pressure.

In an email to staff, she said that she was now well, and through the peak of the condition and wanted to thank everyone who had expressed support, in particular those in RTÉ who spent the weekend dealing with issues that arose as a result of her diagnosis.

Ms Byrne co-presented her show from her home last week, telling viewers she was self isolating following symptoms of a cold and awaiting test results. She is expected to update viewers on her condition on tonight’s show.

Tonight’s Claire Byrne Live programme will be co-presented by Sarah McInerney in studio, and Claire Byrne via live video link at 10.35pm on RTÉ One.

Shane Doran is founder and Co-Managing Editor of News Now Media, incorporating KilkennyNow.ie, WaterfordNow.ie and WicklowNow.ie. He is a former newspaper editor who has held senior executive roles across five national newspaper titles, both broadsheet and tabloid. He was News Editor and Executive Editor of the Irish Independent for more than seven years and spent a number of years in South Africa where he worked as editor of The Daily Voice newspaper. Shane has held senior editorial position with The Sunday Independent, The Herald and The Irish Daily Star and has served as Executive Editor (Group) of Independent News & Media (INM), Ireland’s largest newspaper group.