SPONSORED: Get connected – Imagine has fibre and wireless solutions to rural broadband problem

BRINGING efficient broadband to rural Ireland has become a hot political issue. Several big telecom companies have backed away from the project, which the Government estimates will cost taxpayers €3 billion.

But one provider believes it can supply the service for a fraction of that price. And while debate rages about a national plan, Imagine is getting on with the job.

The wireless broadband company plans to have 155 broadband sites in operation this year and a further 170 by June 2020, giving it a network of 325 sites across the country.

The rollout is aimed particularly at rural areas and will reach 400,000 of the 540,000 rural homes which could be covered by the National Broadband Plan.

The national plan envisages a fibre connection for each house but that is expensive and difficult to install. Imagine also uses fibre but it uses it in conjunction with wireless technology, transmitting the broadband signal to individual households through the network of masts. 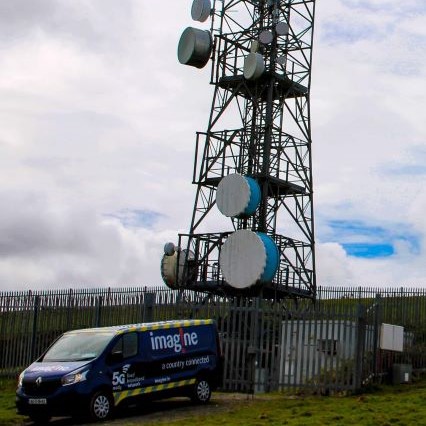 Imagine brings fibre to the mast and then uses the latest 5G technology to make a direct wireless connection to the home or office.

The company’s chief executive, Sean Bolger, says he does not believe it is practical to connect fibre directly to every home.

“The technology of fibre to the home means a lot of digging and bringing cables to homes which isn’t very practical,” Mr Bolger says.

“It is a lot more expensive and takes a lot more time than people expected and will take years to deliver even in urban areas, let alone rural areas.”

In contrast to the projected bill of €3bn for the national fibre plan, Mr Bolger estimates that his network will cost €300m to build. Earlier this year, Imagine secured funding of €120 million when Canadian investment firm Brookfield took a share in the company.

Imagine says it will solve the national broadband problem by delivering fast and reliable high-speed broadband to homes, businesses and communities across Ireland.

“Unlike traditional providers, Imagine builds in the rural areas which need it most,” says Marketing Executive Conor Horan. “We will be the first company to bring 150Mb broadband to over one million homes and businesses.”

In this region, Imagine is covering an area as far west as Urlingford, as far north as Castlecomer, as far east as Goresbridge and as far south as Waterford.

The company says Ireland is in a position to become a centre of excellence and leader of innovative 5G solutions . For its part it promises an “alternative and quicker way to connect homes and businesses to fibre”.

Sting in the tale: Wasps warning to Waterford residents as lockdown eases